My name is Hannah Dean and I am a rising junior interning with the Education Research Alliance (Era) in New Orleans this summer. After a messy, sweaty few days of lugging furniture into my house and casually downplaying my deep fear of any and alll strange bugs I have encountered, I am finally moved in and starting my internship!

My position is a bit complicated in that it is two-pronged. I am writing a paper about civil rights cases related to education in post-Katrina New Orleans for Era, while also working for them as an intern. But before I get into the complexities of my day-to-day tasks, let me explain further what exactly Era does. 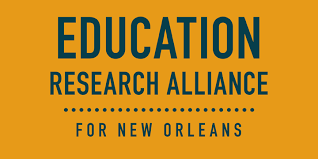 The Education Research Alliance of New Orleans was founded by Tulane professor Douglas Harris, with the support of Tulane’s Murphy Institute, in an effort to generate factual and objective research about New Orleans’ education system on a local and national level. The organization’s research focuses on a variety of topics related to education reform, including student outcomes, parental/family choice, test-based accountability, charter schools and their management organizations, and school finances. Everyone in the office is working on various research projects and publications, which makes for a lot of fascinating conversations when I am wandering around the office!

Some of you might be wondering why there is an entire organization (well, there are actually many organizations) dedicated to researching education reform in New Orleans. The education reform movement in New Orleans has gained significant national attention since the local school district began a total overhaul of the education system here after Katrina. In short, New Orleans schools were generally underperforming before Katrina – 74% of the city’s public schools were considered failing schools based on their standardized test scores (New York Times, 2013). After Katrina, the state’s Recovery School District took over the majority of the city’s underperforming schools, taking away significant local control from the allegedly corrupt Orleans Parish School Board. Many administrators and educators saw this as an opportunity to improve the local school system through various strategies, including the introduction of charter schools. I won’t go into a lengthy explanation of those, but in short they are publicly funded schools that are run by a charter management organization (CMO) rather than the state. These schools have greater fiscal and curricular autonomy than traditional public schools, but this autonomy comes with the price of increased accountability standards often tied to standardized test scores. The Recovery School District began issuing charters, and in the fall of 2014 became the only all-charter school district in the nation (read an excellent article about that here). The education reform movement here began to attract more attention as controversies related to teacher hiring practices, charter disciplinary policies, standardized testing, decentralized control, and the loss of neighborhood schools. All of this change and controversy has put New Orleans in the national public education spotlight, which is why there are organizations like Era producing research on whether the reforms here have truly been effective.

Whew! I will add more information and news about education reform in NOLA throughout my posts, but hopefully that introduction helped clarify a few things (if you are an education nerd like me and want more, here is another article)! My job this summer is to conduct interviews and research on education reform-related civil rights cases that were filed after Katrina. I am starting with a case on discrimination against special needs students in New Orleans public schools, which I will provide more detail on as I progress. I have also been working on some research about school districts in which the school board has collaborated with charter management organizations in their district to create a more coherent, centralized governing body.

My first day in the office was fantastic (in part because of the free Reginelli’s pizza at lunch… but also for other reasons!). As I mentioned before, everyone is working on their own projects, but there is also a lot of collaboration going on between coworkers. I had the chance to watch some practice presentations that some staff members will be debuting at Era’s national conference in two weeks (which I will also post about!), which was an awesome experience for someone who eventually wants to present her own work in a similar forum!

I am looking forward to learning more about the civil rights cases that I am investigated and getting to interview various community members about their experiences with pubic education in the city. I also hope to hone my writing skills this summer so that I can produce a paper that will be helpful to researchers at ERA. Finally, I am very excited about the opportunity to be directly involved in the New Orleans education reform movement this summer, to be able to make an contribute to a better understanding of educational equality in a city that I love – pending my ability to avoid all of the bugs!