While magical and incredibly unique, New Orleans is a city that has many challenges. This fact lies at the center of the Roots of Renewal’s mission, which is, “to creating holistic solutions for the root causes of violence and poverty, including reintegrating formerly incarcerated neighbors back into their communities. It is dedicated to increasing access to social services and employment in Central City, creating equality of opportunity, reducing violence, and promoting peace.”

The organization’s focus on Central City comes about for a couple reasons. Firstly, Central City is home to much of the rich culture that exists in New Orleans, such as the Mardi Gras Indians. A prominent and historically minority neighborhood, Central City, and particularly Oretha Castle Haley Boulevard, was the center of black commerce prior to desegregation. Many of the 200 business in the area were minority owned. Following desegregation, however, many of the families chose to shop on Canal Street, where they previously had been banned under Jim Crow Law. OCH lost much of its clientele and in the later decades of the 20th century the formerly bustling area lost much of its business, and blight began to set in. Today, Central City is one of the poorest neighborhoods in the city; its residents experience high rates of violence; and, per capita, it is the most incarcerated neighborhood in the entire world.

Working on site last fall, these facts truly set in. Many neighbors would walk by daily and stop to ask what our program was about, and if they could work with us. Others shared that they too had been incarcerated. I quickly became absorbed into the neighborhood as I met many of the neighbors in between their work shifts, when they would sit on our neighbor Fortune’s porch. One porch-regular would often bring the Mardi Gras Indian costume beadwork, listening, chatting and beading with ease.

After the first cohort graduated, I was sad that most of my time has been spent out of the neighborhood, however, this week we were excited that the developers that we have partnered with to finish the house have finally been able to get started, and progress on the house is being made! The crew got all the siding up within the first two days! I am also extremely excited, that the neighbors will finally have something nicer to look at than house wrap and plywood, even if they will have to put up with construction noise once more. 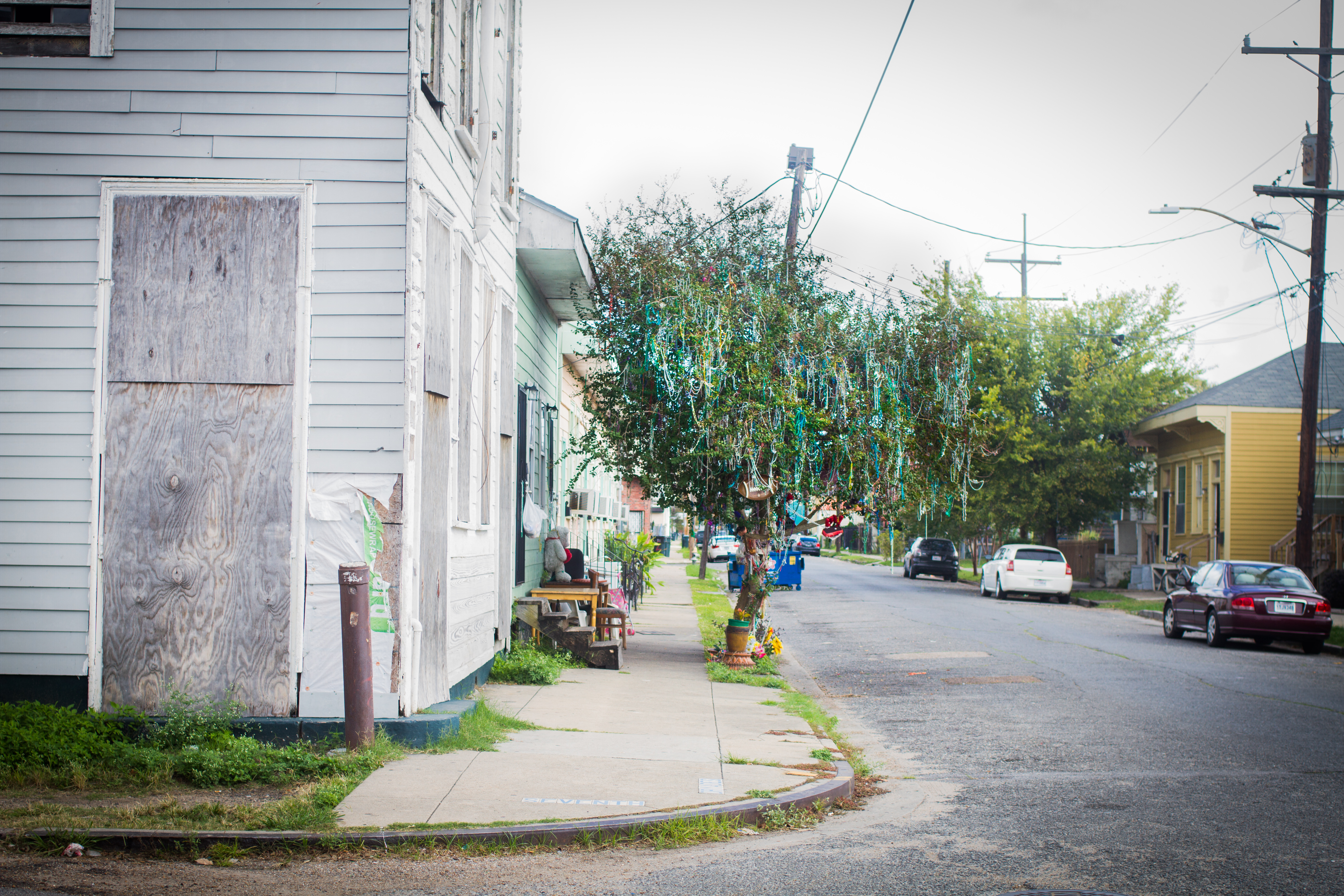 The Mardi Gras Bead tree across from the work site.

As the new crew is chugging along on the house, I have been doing office work. My first task this summer has been setting up our volunteer web designer with all the information he needs to give us a dashing new website. We met for a couple hours last week and went over our visions. Since, I have been prepping all the materials, and I am happy to say I sent everything over this morning, so he’s officially ready to get rolling. I am hoping by the end of this summer, I’ll be able to hyperlink y’all to a fabulous new website! 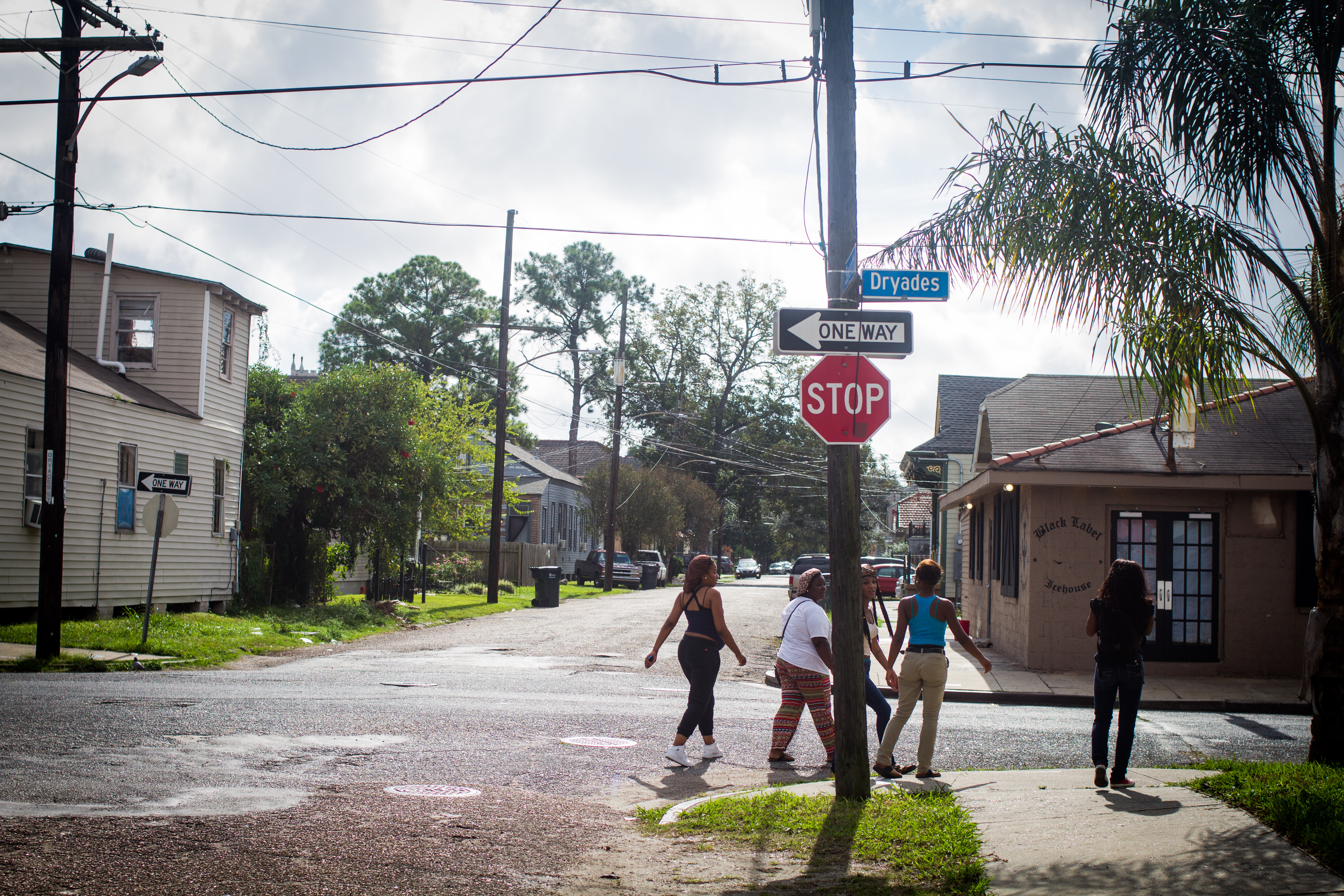 Along with the website, I have been tracking down potential opportunities to connect future graduates with. This has included doing research on the apprenticeship landscape in New Orleans, which unfortunately only has six registered apprenticeships actually located in the city, though there are 16 within the New Orleans region. A big factor in matching individuals with opportunities is making sure they are viable. In working with one Roots Alum these last weeks, issues of transportation and criminal records have come up heavily. While public transportation in New Orleans is known to be lackluster, transportation from predominantly black neighborhoods on the outskirts of the city is even more challenging, particularly when trying to get to the more opportunity-heavy areas. These challenges become particularly frustrating when individuals are otherwise perfectly matched for these opportunities. In order to combat these issues, I have been looking into transportation options, and trying to brainstorms some possible tools that individuals can use.

Lastly, we have been seeking out professional advice about board development and human resource best practices. As a startup, we have to learning everything from the ground up. During the program, our participants were our top priority and consumed practically all of our time and energy. Now that we are between cohorts, we are spending more time focusing on structural aspects of the organization, and how to capture and retain the most talent. Working for a startup is full of excitement, but often more stressful than working for an established company of organization. The benefit is that you are often able to be more involved in several aspects of the work, as structures are a little looser, and the organization needs people to be as resourceful as they can. However, on the flip side, sometimes the disorder or unanswered questions can lead to a lot of ambiguousness and require one to take on a lot more personal responsibility in finding answers that others in the office also do not know. Often, though, finding these answers can be some of the most rewarding work.