TuckerGurl’s office is located in the Bywater of New Orleans, LA. It is in a nice, quiet area on Royal Street with access to an outdoor patio and a green space. I know it sounds very relaxing, but unfortunately for the TuckerGurl crew, we haven’t been able to enjoy it lately. We are currently in pre-production for the feature length film Paper Chase, and it’s all hands on deck. From booking sites, to callbacks and catering, everyone is constantly moving. We will begin shooting in early July and I am honestly terrified. Along with interning I will also be acting in the film. I have never set foot on the set of a feature length film, let alone starred in one. I’m not sure exactly why I was chosen to be in the film, especially since I didn’t even audition. I began interning for TuckerGurl in March of 2015 (see interview tips below), and I was offered the part that summer. I was helping organize auditions and reading through sides with the potential talent. Once the auditions were over the director, producer, and I went out to dinner to celebrate the end of a long audition process. While eating they told me they would like for me to play the lead in the film. I was surprised, but gladly accepted.

Since then I have continued interning for TuckerGurl and I have learned a lot in the process. Currently I am helping with, as well as learning, the ins and outs of pre-production. This involves a lot of work for each person involved in the film, but it makes the filming process that much easier. Since I am one of the main characters in the film, my boss has primarily asked me to do work involving callbacks, rehearsals and character development. I recently found out I will be volunteering at a summer camp for young girls, where they learn to build their own robots. My character in the film is very interested in robotics, so the director wants me to be as knowledgeable as I can be in that subject area. Here is a picture from my first robotics lesson: 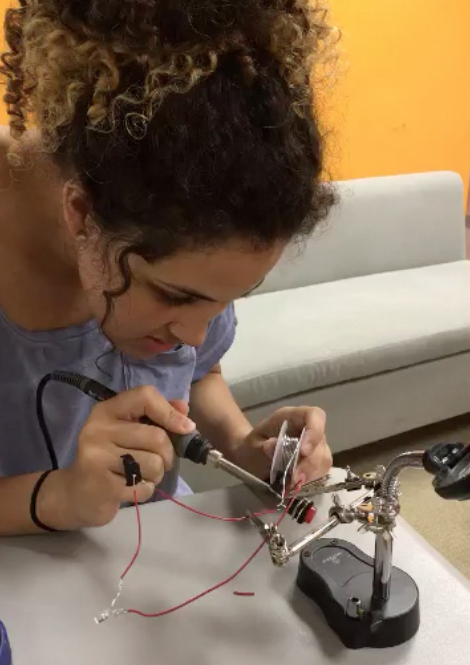 I was not expecting to learn how to build a robot, but I’m excited to see how it turns out! It’s only been two weeks and so far I’ve learned about the pre-production process, helped conduct auditions for a feature length film and started to build my first robot. I’m confident that by the time this film is completed I will have acquired many more skills (I am particularly looking forward to editing during post-production). I look forward to keeping you all updated as the film progresses!

-Always plan to be at least 15 minutes early.

-Prepare questions ahead of time (before you leave the interviewer almost always asks “do you have any questions?” Having a few already prepared looks good)

-Research the company/organization you’re interviewing for (this will not only help give insight and information for the interview, but will also give you an understanding of the company and help you determine if it’s a good fit for you.)

-Don’t be afraid if you do not know something. Ask questions. You are not expected to be an expert.

-Be confident, but not arrogant.

-If possible, ask what attire the interviewer would like you to wear. If you cannot, or don not feel comfortable asking, dress business/business casual.

-Prepare the night before. Write down your skills and positive attributes. Know what you bring to the table and be able to have a conversation about it.