Hey guys, it’s Cory again, and I have some updates on the ol’ internship:

This summer I’m involved in a research study funded by the Louisiana State Board of Regents and carried out primarily by scientists at LSU’s school of Public Health. We have a four-year grant to measure and monitor the amount and impact of lead contamination in New Orleans water system, and we’ve set out to prove that the vast underground labyrinth of old lead service lines underneath the city might not be the best thing to run people’s drinking water through. One unique thing about the study is its real-life impact on the participants. Each test kit we distribute to a New Orleans household is meant not only to provide us with data, but to extend free water quality testing to city residents living in high risk areas, as well as resources in the case of positive test results.

Like many of my coworkers, I’m personally based in the public health building of the LSU Health Sciences Center, where my mentor/supervisor Dr. Katner works. Me and a few other interns work in a little computer lab just across the way from her office. When at my cubicle, I’m generally doing one of three things:

Here’s an example of a nice map I made on GIS: 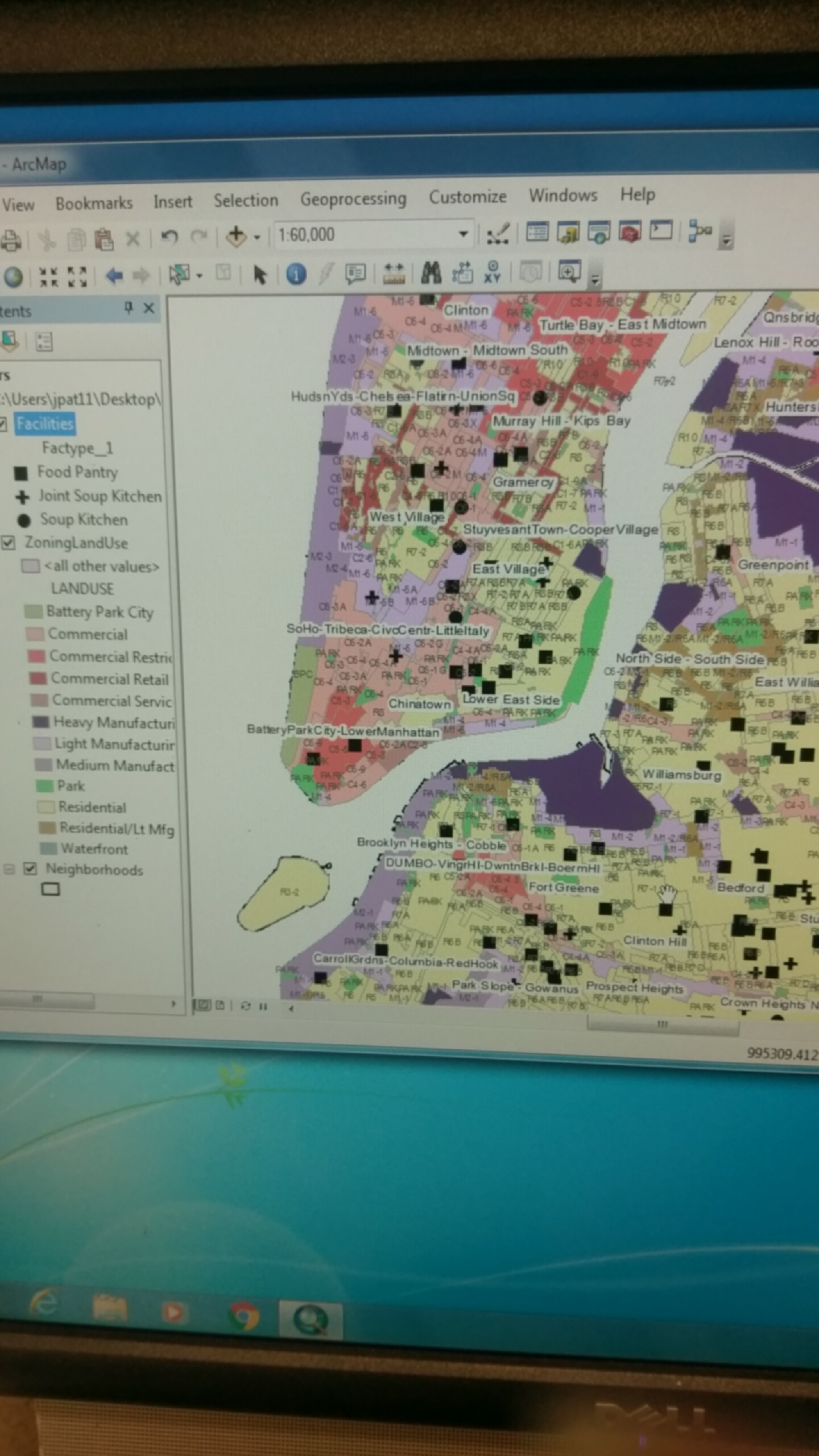 A lot of times I’ll go to the office for part of the day then leave to go drop off kits at people’s houses. Other times I work all day and do dropoffs in the evenings after work. Sometimes I go with Dr. Katner to local nonprofit meetings where we try to get them to collaborate with us. I don’t really serve any functional purpose at these meetings, and I’m pretty sure I’m only invited because I listed “get experience with the nonprofit sector” as one of my learning objectives for the internship, but it’s nice to be included.

Honestly I love my workplace so far; the people working on the project fall all across the spectrum in terms of age, field, and education level, but we’re all here working together. Lizzie and Joye, the two interns I’m doing GIS with, are my younger sister’s age, and I think we’re friends. I mean in general I have to be friends with someone for about two years before I feel secure that they’re not just pulling my leg with some sort of elaborate pseudo-friendship prank, but they’ve been very nice to me and that’s all a girl can really ask for. I distribute the kits with Komal, the study coordinator, who tells me all about her life as a public health professional taking on the big city. And Dr. Katner, of course, is a wonderful mentor: she’s always sending me links about webinars and trying to help me reach my learning goals however she can.

Overall, I just can’t believe how lucky I am to have gotten this internship.

How I, A Humble Spud, Got This Internship From Some Objectively Happier Dimension

Finding an internship in a new city is a lot like walking around a temperate deciduous forest in mid-June while waving your arms around wondering when or if you’ll hit a spiderweb; people keep telling you that they’re everywhere, but it’s sort of hard to see them.

I’m not going to lie, I came sort of late to the internship game; I’ve spent the last few summers working minimum wage jobs that, through suffering, built me a whole lot of character but not a lot of resume muscle tissue: Food prep at the waterpark, cashier at the hardware store, door-to-door girl in Kansas City, and beleaguered camp counselor. But this year I was ready to break into the world of public health!

Well, from December 2015 to April 2016 I worked my little heart out applying for all the internships I could find on the internet, which is of course, a group comprised of the same twelve internships that every college student is applying for simultaneously. Despite the sheer amount of effort I poured into this endeavor, it would have been foolish for me to expect anything other than continued rejection, showered upon my sensitive self, and by April I was dragging my sad, unemployed carcass to the NCI.

It was at this point I learned that I had been doing everything all wrong.Here are some things I learned far, far too late in that process:

Remember: do not assume you can do everything by yourself. Being able to do everything by yourself is a capitalist myth. You may have to ask for help. But who do you ask, young out-of-towner with few connections? The kid on your floor who squishes spiders for you? Your aunt that can very accurately tell which of her nieces has MRSA? The vision of St. Therese de Lisieux that appeared in your second cousin’s refrigerator back in the 70s to warn her about the dangers of tobacco?

If you are a Tulane student reading this, chances are you are paying multiple dollars to be a Tulane student reading this. At least a few of these dollars actually compensate your professors and keep the school’s facilities running but an equal number of them fund wild extra bonus privileges like quad concerts and career counselling. Yeah, I didn’t realize this either until I had already been actively going to school at Tulane for 3.5 semesters, but there are all these people scattered around campus that we’re all paying to help us find jobs and internships, and in many cases not utilizing. Some examples of people at Tulane who are paid to help you find a cool opportunity: CELT, CPS, and if you meet certain demographic criteria, the NCI. I wish I had talked to them much earlier, given that when I finally did, they gave me an Extreme Makeover Resume Edition (TM) and pointed out bowls of candy within their offices.

Alternatively, just talking to professors you think are cool is a very solid strategy. Based on my own experiences and those of my peers, I would probably say that professors help students the way I make mixtapes for my friends; no one would even think of paying me to do it, but I do it anyway because I love my friends and I love burning mixtapes. Likewise, professors probably think their field is pretty cool and are willing to put in some effort to encourage someone else who is interested in the field.

That’s how I ended up here at the Lead Study. I had interviewed my mentor Dr. Katner for a semester-long project in one of my public health classes and much later, on a whim, shot her a rhetorically skeletal email that literally said: “Hey I really think the work you’re doing is interesting and important and would love to get involved. I’m here all summer, so let me know if you ever need any free labor.”

I poop you not, people reading this, 30 minutes later I had an internship. Well, that was easy, I thought to myself, reflecting angrily on the hours and hours and hours I had spent filling out really involved applications for those super competitive internships they advertise online because I had thought those were the only internships because I had foolishly tried to do everything by myself. Don’t be like me.

I’m not really sure how to end this post, so in the spirit of New Media, here’s a small listicle I coincidentally wrote at the office in an attempt to comfort myself during the four harrowing hours it took me to correctly download ArcGIS.

Okay, so yesterday you moved into your residence for the rest of the foreseeable future, and today, after waking up disoriented in a strange room that you guess is yours now, you get to the business of getting to work, the first day on the job. Here are some helpful hints:

One thought on “A Lengthy Post, but Not as Long as the Combined Length of All the Lead Pipes in this City”