Three weeks ago I received the skeleton website back from our amazing volunteer computer scientist/web designer, and now have been adding flesh to the bones through updated content. It is amazing how much time can be spent just to get everything aligning right, but the process has been a new adventure, and seeing the website come to life is well worth it. Going through all the photos I have of our wonderful graduates and our time during the program makes the job even better. While I cannot show the whole thing, I can show you some thematic tastes of what I have been working on in the web world (the various lines are from edit mode) in form of before and afters. 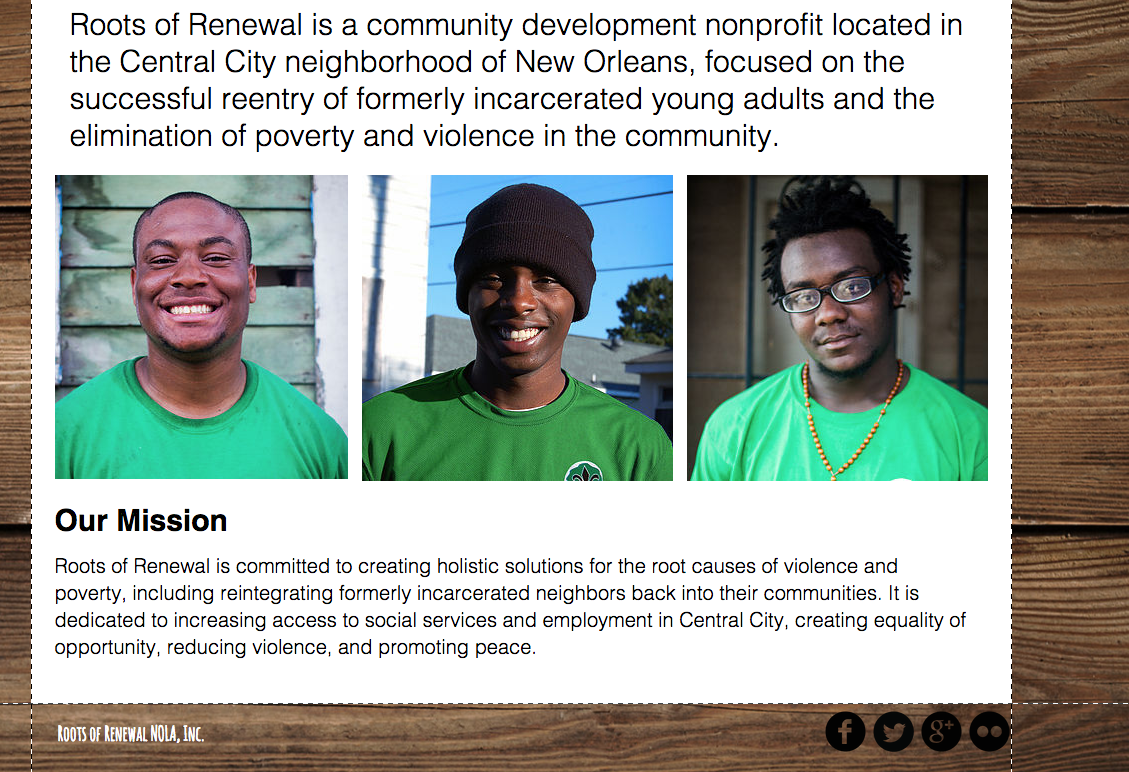 While the progress is inspiring, and I keep pushing forward, there are still pages to be built,links to be connected, and a donation page to get working! I also am working on creating some infographics to explain the issues that we work around to have front and center on the home page. Those will have to be revealed at a later date though…

We’re looking at launching the website end of August, early September, so be on the lookout for RootsofRenewal.org in its full new glory, but in the mean time, definitely check out our current website to learn more about us, and so you can appreciate all the newness come next month.

Little did I know, when I got into nonprofit work, and working with Roots of Renewal, that I would spend so much time learning about tech and graphic design. Redoing the website along with our computer scientist volunteer has provided me great new skills in the web design world, as well as the tech world. Because the web is so male-dominated, its fun to try and infiltrate the system a little bit, and I will be more than excited to show off my new skills in future years and jobs.

One of my biggest goals for this summer was to work on networking within the city, and though it is too hot to move outside, I have finally been able to make some ground on that goal. Luckily for me, most networking in New Orleans takes the shape of afterwork happy hours hosted by amazing organizations/groups that do very cool work. One of the events I attended recently was hosted by the Committee for a Better New Orleans, which just put out an app that lets users fill out their ideal (yet realistic) New Orleans city budget in an effort to promote transparency and provide better community input for the city budget. Their goal is to get 600 players by the end of this year. (Make your own voice heard and play here: https://bigeasybudgetgame.com/)

This event was sponsored by fantastic organizations such as 504ward and the Hispanic Young Professionals of Louisiana, and brought together a bunch of young professionals who are focused on doing great work in this city. I was able to meet individuals who were interested in volunteering their construction expertise with us, as well as people who wanted to join our email list.

Outside of the general networking rounds, we have also been able to sit down with some important people who we have been trying to meet with for a while, including some people in the mayor’s office! The city has several initiatives around reentry work and affordable housing, thus, its been our dream to be plugged into the resources and networks that already exist and connect with the people who have been doing amazing work similar to ours!

Since December, we have also been working on a documentary project with some local filmmakers around structural oppression and gun violence. I recently was able to sit down with one of the filmmakers to discuss where we are at and what more we need to make this project great. It was also great to look back at some of the footage we got of our graduates, and remember where were at so many months ago! Since our meeting, I have had several phone calls to make and interviews to organize, but touching base with the various people and groups we have worked with over the last years is always a treat.