Describe yourself and why you wanted to attend the Feminist Camp: 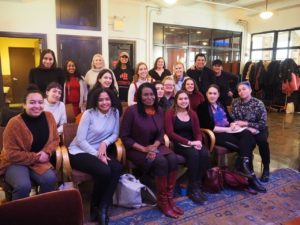 As a Gender and Sexuality Studies major, I’ve learned a lot of theoretical background in regards to feminism from the early 20th century to the present day. All of the professors at Tulane have incredible backgrounds and I’ve learned so much from them and my peers in my classes. Having that background and understanding is a great place to begin, but I felt limited by practicing feminism through a theoretical lens and through activism on a small scale. I wanted to attend Feminist camp to learn how to apply and extend my feminist theoretical background to real life situations and hopefully discover ways in which people are able to continue with activism and feminism in their careers on a daily basis.

Describe your favorite parts of the conference:

It’s hard to sit down and list out favorite parts because the overall experience was my favorite part, but if I had to list them out, I really valued all of the speakers who came in to talk about their experiences as feminists. One speaker in particular works for UNICEF to bring equal education to girls around the world. She has worked in over 55 different countries providing access to education and materials, often working across generational lines, teaching young girls core school subjects and empowering them to teach their mothers and female relatives what they’re learning. Aside from her work, this speaker also fosters children, proving the importance of living true to your values outside of work and in the home too.

On one of the evenings, we got to see an interview with Malala Yousafzai. Malala has done incredible work and I’m very excited to read her latest book. It’s incredible to think that she is the age of many college students and has already advocated for so much and is living her best feminist life.

Aside from the planned parts of the conference, one of the nights all of us who were over 21 went to Stonewall and saw a drag performance. Not only was it incredible to enter a historical landmark that some believe kicked off the gay and lesbian liberation, we saw a drag performance and got to see how people were incorporating feminist values into their leisure time.

In one of the sessions, a doctor who performs abortions came in and gave a workshop to the participants, explaining her background and what a general consultation would look like. We learned about the difference between the abortion pill and operation (and some participants learned the difference between an abortion pill and plan B from a reproductive lens). From there she performed a demonstration of an abortion on a papaya since that fruit is closely shaped like a uterus. All of us in the workshop then had the opportunity to perform a mock abortion on a papaya using actual tools the doctor would use in the hospital. This workshop helped us better understand abortions and took away the fear in the mystery of a process many people have experienced.

Detail what you learned that you hope to never forget:

I think the most valuable lesson I learned is that feminism can be applied to nearly any job and all it takes is passion and ambition to turn that goal into reality. Some of the women were working in jobs directly related to gender and sexual minority issues, but most of the presenters worked 9 to 5 jobs and either applied their passion for feminism to their office jobs or worked on activism and feminism outside of their jobs through side projects. Fulfilling lives don’t require a “what” as much as a “why” and I believe no matter where I end up I will take that lesson with me everywhere I go.

Why should other students attend a Feminist Camp:

Feminist Camp is an extremely inviting environment that offers a space to further explore a passion or interest in feminism. The best part is it doesn’t matter where you are on your “feminist journey” because every single participant will learn something new during their time spent at Feminist Camp. Some participants had masters or PhDs related to gender and sexuality studies, some participants were just beginning college and took a class or two on women’s/gender studies, and some participants had no formal experience with feminism but were interested in the topic matter and decided to attend the camp. Because all of the participants come from so many different backgrounds, it is an incredible space for teaching and learning. I believe some students may shy away from applying for Feminist Camp because they don’t believe they have enough experience, but the beauty of this space is that anyone with an interest in feminism is welcome and will learn so much.

How did this experience help with your future ambitions?

Gender and Sexuality Studies is listed as my second major because I began by taking some classes that interested me but never believed I would turn that into a “real” job, but rather, it would stay on the back-burner as I entered the job market. Feminist Camp taught me that there are thousands of people in cities all over the world who are making a career out of feminism and I hope to be added to the list.