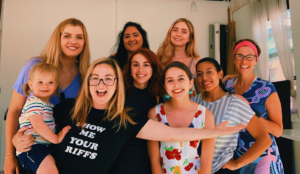 When landing in the deep south after a complex week in Seattle and a long flight, I knew exactly what to do–sit in an airport McDonald’s with a notebook for two hours and attempt to process everything I had just absorbed. This was no small feat. I found myself making extensive lists of feminism-centered media to dive into, developing plans to be mindful of social activism in every action and decision, and essentially disposing of every idea I had of what one’s life trajectory should look like.

I have always considered myself a feminist, and I always felt that I strongly believed in social activism and social justice. I feel passionate about a number of ideas from reproductive justice to workplace equality and overall ethical practices, but Feminist Camp was a wake-up call. I quickly realized that I was too passive in my feminism. That’s awesome that I felt that way, but it doesn’t mean much for anyone but myself if I’m not doing anything about it–and this is where being an actual activist comes in. A week in Seattle showed that I have a lot of room to grow, and real change comes with action. To experience this activism was my favorite part; to go throughout the city and see how corporations and small businesses and freelance artists are ethical and socially aware in every business move, every day of work, and how they equally support everyone.

One of the most powerful experiences for me was meeting women who were in control of their lives. A common narrative seems to be that people work to pay the bills, and can’t wait to go home—but these women catered jobs specifically to their passions and aspirations, and they’re being social activists while they’re at it. For example, the amazing photographer Jenny Jimenez refuses to work with clients that are intolerant towards any group of people. The women I met at Starbucks maintain programs to actively support coffee tree growers in the difficult farming process and so many women empowerment focused programs, like educating women in the countries that they get coffee from. It was especially inspiring to hear from so many mothers who believe in having a career and having children, and disappointing to learn about everything women have to demand in order to build their career and have children–motherhood shouldn’t be a tax.

These feminists do what they want to do, and they ditch anything that isn’t fulfilling or doesn’t give them the equal benefits and treatment they deserve. They detached from the status quo, like the two at Planned Parenthood who didn’t go to the medical schools they got in to or stopped practicing law to work where they wanted to, at Planned Parenthood. Or, they’re living and thriving through an art gallery dedicated to female and trans artists, doing freelance poetry and communications work, becoming the Director of Entertainment at Starbucks after making that job even exist. Not to mention, they are constantly ethical in all of their moves, from the Starbucks corporation to the private gallery. Forget the trajectory; you have forever to be that big lawyer. Go work on a farm for a year, go volunteer for the pro-choice lobbying organization, go do what matters to you, and you’ll end up where you’re supposed to be.

Many sessions were focused on reproductive health and justice, which was exciting for me as a public health major especially interested in these areas. At Planned Parenthood of the Pacific Northwest and Hawaii Islands, it was so cool for me to be able to talk to the public health queens that work for the biggest sex educator in the United States, doing amazing work while fighting so many obstacles. This was a workplace that I felt drawn to; a career within a social justice movement that I could easily get behind–that’s how you incorporate activism and feminism into your everyday life. It was amazing to see the political side of things through NARAL Pro-Choice, a nonprofit lobbying group confident that Roe v Wade would soon be overturned and that post-Roe America would be far more terrifying than pre-Roe America. As terrifying as it was to admit this, it was refreshing to talk to NARAL about what they were already doing to begin combating this and see how a nonprofit can armor themselves to effectively compete with the lobbying against them of large corporations. Over the week, it was also interesting to hear from women who struggled with infertility and were sharing their stories, and to talk to mothers who never saw themselves as mothers and explained how you do not have to be an amazing mother doing it all on your own. You need an army. One of my strongest interests, however, comes in with maternal health care racial disparities. For me, it was so interesting to talk to Surge Reproductive Justice about intersectionality within health care and how one’s race determines their benefits and their health. I had already been processing this a lot during the school year, but I saw what Surge was actually doing about it–program after program reaching out to prison systems, matching women of color with doulas, and overall attempting to reduce this disparity and secure reproductive health for all.

This experience essentially caused me to take a step back and rethink everything I planned for my life. I have now seen that it is possible to do exactly what you want to do, and to move away from anyone that’s not offering equal treatment. I’ve learned to get over my own trajectory of undergrad to masters to medical school, and to get over the fact that if I still choose to do that, I don’t need to worry about doing it as fast as possible. I love public health, and I’ve especially seen the possibilities in my interests of reproductive health and maternal health. So, I’m prepared to be okay with changing my mind if I find that doing what I really want to do doesn’t require medical school, and not wasting my time feeling tied to that life path. I’ve also recognized that I really don’t need to focus on one thing anyways. More important than all of this life-path-changing, I have realized that I am capable of far more than what I’m doing. There are so many opportunities to work for social justice on a college campus–I can work for more organizations, I can be a better feminist and to make a career that is centered on ethics and activism, and I know that this mindset should guide any life path that I have.

You should attend Feminist Camp if you want to reconsider everything—and I mean that in the best way possible. You should do that. Don’t end up unhappy in what you thought was your ‘dream job’ while some male boss expects you to do your work and be quiet. We should’ve come a long way from that. Not only that, but you’ll spend the week and share a hostel with some of the coolest women you’ll ever meet, who will help you grow even more in this process. Your frame of mind will shift towards a mindfulness of social activism in everything you do, including your life choices, and you should do that, and Feminist Camp is the place to do it. You will begin doing instead of thinking. I had to sit down in the McDonald’s for two hours to even begin processing this, and I’m still doing it, and I’m so happy that I am.