As I wrap up this fall semester with Planned Parenthood Gulf Coast (PPGC), there is a lot to be grateful for. On top of working on-site each week, I had the opportunity to attend the Felicia Kahn Citizenship Award dinner, the annual Fall Celebration held in City Park, as well as receive invitations to several other events in New Orleans and in Baton Rouge. To have the chance to meet the leaders, storytellers, volunteers, and donors of PPGC has been inspirational in my journey with Planned Parenthood.

Perhaps one of the most pivotal moments for me this semester grew from an opportunity given to me by Dr. Clare Daniel. Over the summer, I wrote an article detailing the restrictions of Louisiana abortion ban legislation and the likelihood of increasing the occurrence of self-managed abortions. As procedures undergone without the supervision of a medical profes 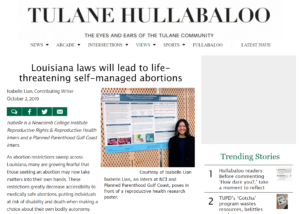 sional, self-managed abortions stand as another way to end a pregnancy than more traditional methods. A version of the article was later published The Hullabaloo, Tulane’s student-run newspaper, under the title: Louisiana laws will lead to life-threatening self-managed abortions. In it, I discussed the potential risks of self-managed abortions. Especially for those who do not necessarily know how far along they are in their pregnancy, this can affect the proper dosage needed for an effective and safe abortion. Particularly, the argument was framed in a way that highlighted the dire situation here in Louisiana in terms of legislation. With many bills finding passage in Baton Rouge, accessibility to medically-aided abortions are significantly limited with just three clinics left in the state, two of which face potential closure due to upcoming legislation.

In response to my article, another pro-reproductive rights writer shared her thoughts, pointing out that my article had further stigmatized a person’s choice to a self-managed abortion and should also consider the underlying reasons why one may choose to self-manage their abortion. I am very grateful that she highlighted the complexities of self-managed abortion and it really got me thinking about the power of language and interpretation when writing to large audiences. Of course, destigmatization of long stigmatized abortion procedures is of the utmost importance. Especially with the advent of medicated abortions – they are used for most early-term pregnancies – self-managed abortions are no longer the bloody, back-alley abortions depicted from the pre-Wade era. Yet, we cannot forget that under current laws and regulations in this country, it is illegal for someone to provide prescription medication without a valid prescription from a health care provider. The stigma and policies that restrict people from accessing reproductive health care from skilled health care providers are dangerous. That’s why Planned Parenthood and many other reproductive health organizations fight to ensure that abortion remains safe and legal in this country—because we believe deeply in the right of all people, no matter who they are, where they live, or what they earn, to make their own personal decisions about their bodies, their families, and their paths in life, without political interference.