This year has been a whirlwind for those involved in reproductive rights advocacy work in the South and I have had the privilege of being at the forefront of the fight to keep abortion safe, legal and accessible.

Although the New Orleans Abortion Fund has a primary focus on directly funding abortion procedures for those in need of help, we also have a growing involvement in working to educate the public surrounding legislative efforts to criminalize abortion, specifically this years Supreme Court Case of June Medical Services LLC v. Gee. NOAF has allowed me to grow my interest in being a youth advocate along with inspiring me to a pursue a career in social justice based work.

So far, I have had countless opportunities to participate hands on in multiple combined efforts to promote a pro choice agenda in Louisiana and nationwide. In January I attended a Ballot Initiative Strategy Meeting alongside the current executive director of the New Orleans Abortion Fund and my fellow intern who is based in Baton Rouge. I am also thrilled to be traveling to Washington D.C. to attend the My Right My Decision Rally as a representative for the Abortion Out Loud cohort, which is working to destigmatize abortion and encourage individuals around the country to share their personal abortion stories.

Through my internship I have learned the difficulty of continuous efforts to fight for what I believe to be an unquestionable right in the 21st century. The opportunities that have been made available to me to have direct involvement in remarkable organizing and activism are something that I will be forever thankful for. 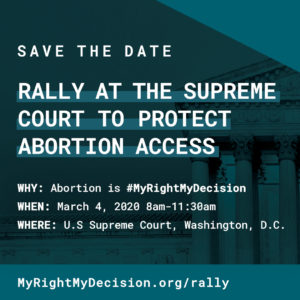